Story title: Nosh from the Underground

Maybe an O. Henry style tale where the twist at the end is that the protagonist is revealed to have been a candle all along.

SF story: The Aliens Have Arrived and Are About to F*** Up All Our S*** 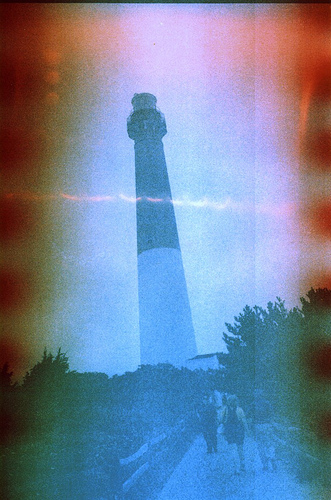 I have been thinking recently about spicing up my photographic activity by perhaps getting into the toy camera scene which relies on the Lomo, Holga, and similar inexpensive plastic cameras to come up with unusual grain and color effects, to the extent of visiting the enormous B&H photo superstore in New York city to see what they had to offer. In the end, however, I decided against picking up any more gadgetry and have turned toward the even more obscure specialty of expired photographic film to come up with a similar kind of weird effect. Conveniently, my badly neglected two decade old Nikon FG-20 was already loaded with a roll of film maybe eight or ten years old that I hadn’t gotten around to finish.

Here is an example of the kind of image you get when shooting film going back several years and bring it in for development. The helpful staff at the neighborhood drugstore returned my prints with a note giving tips on how to avoid Poor Color Quality, including a warning about old or outdated film. I had to chuckle — I could not be more delighted with the trippy retro results in fact, and am looking forward to shooting a couple other unexposed rolls of aged film which have just been laying around deteriorating in some unpredictable fashion.

I think it would make a lovely book cover as well.

Music for Friday: a cover of John Coltrane’s Naima

Not implying any slight against Skeet’s artwork, which I admire greatly, just that I have a hard time getting past our recent bathroom renovation, about which more later.